skip to main | skip to sidebar

As it turns out, the more fossils we find and evaluate, the worse it gets for evolution. Charles Darwin was astutely aware of the problems the fossil record presented for his ideas, and he hoped that future discoveries would eventually vindicate his proposition of progressive gradualistic evolution over deep time. But the fact remains that throughout the fossil record all basic types of creatures appear suddenly and then stay the same (stasis) for alleged eons of time. Many are still alive today and look just like their fossilized counterparts. In addition, no undisputed evolutionary transitional forms between different types of creatures have been found.

Now a new study in fossil moths continues to undermine any sort of fossil evidence for evolution.1 A group of scientists used optical microscopy, scanning electron microscopy, confocal laser scanning microscopy, and transmission electron microscopy to reveal the detailed structure of wing scales in ancient moth fossils found in both amber and rocks. The Cretaceous amber fossils were alleged to be about 99 million years old and the oldest Jurassic-rock fossils were dated at about 200 million years old.1
Like moths, butterfly fossils also confound evolution—the diversity of fossil butterflies are roughly equal to those alive today.

Using the wing detail patterns identified in the oldest Jurassic specimens and using computer modeling to prove the optical properties of the scale arrangements, they showed that these ancient moths had brilliant metallic-like colors. But most importantly, the moths and their microscopic details were similar to a living super-family of moths known as Micropterigidaem, who also exhibit patterns of metallic colors through the same high-specialized scales.

Both moths and butterflies are members of the insect order Lepidoptera whose wing colors and patterns are created by optical effects (interference, diffraction, or refraction) rather than by pigments as found in most other animals. The diverse and often startling metallic-like colors arise from the specified arrangements of wing micro-structures that interact with light. And like moths, butterfly fossils also confound evolution—the diversity of fossil butterflies are roughly equal to those alive today. In a research paper on Lepidopteran evolution, the authors state, “Remarkably, the proportion of butterflies among the fossils in number of specimens (some 80 specimens known) is close to the proportions among extant Lepidoptera in species.”2 Very little insect evolution is evident at all in the fossil record, as noted in a recent paper, whose authors state, “species-richness data also tentatively suggest little or no net increase in richness over the past 125 Myr.”3 The major types of insects appear suddenly in a rich explosion of diversity and then stay the same from then on. While these discoveries fit perfectly with the Bible, they utterly defy evolutionary expectations.
Clearly butterflies and moths appeared suddenly on Earth and fully diverse along with showing no signs of evolution.

Clearly butterflies and moths appeared suddenly on Earth and fully diverse along with showing no signs of evolution, but how did they end up as fossils? The Bible tells us that about 4,500 years ago a global flood destroyed the face of the earth. This violent catastrophe rapidly buried and fossilized billions of creatures which are now found in sedimentary rocks the world over—including many types of insects. The reason these creatures look similar to their living counterparts without any evidence of evolution is that all things were created by God to reproduce according to their kind, exactly as the facts of science have been showing us in discovery after discovery.
References
Stage Image: Micropterigidaem

*Dr. Jeffrey Tomkins is Director of Life Sciences at the Institute for Creation Research and earned his Ph.D. in genetics from Clemson University.
Posted by Profile at 7:42 AM No comments:

The Amber Museum in the Mexican city of San Cristóbal de las Casas has a new specimen. Amber sometimes preserves insects, but this specimen contains a whole lizard. This unique discovery confirms two clear trends found in amber fossils.
The discovery site lies within the state of Chiapas in far southern Mexico. Amber collecting has become a key economic activity in that region.
Fox News Latino reported this remarkably rare find, which not only preserves the entire body of a vertebrate, but also preserves some of that creature's original soft tissues.1
Creation Science Update reported the 2008 discovery of an amber-encased gecko leg from Myanmar.2 Although dated at 100 million years, it was identical to modern gecko legs and instantly doubled geckos' supposed length of stay on planet Earth.2 That discovery confirmed one clear trend—animals and plants found as amber fossils look remarkably similar to their living counterparts.
Although some amber-encased plants, protists, and insects—or often just their varieties—have apparently gone extinct, many clearly identify with recognizable forms—including spiders, yeast, hair, ants, flies, butterflies, algae, amoebae, and even gall mites.3,4,5,6
A second clear trend among amber finds, one that the Mexican lizard fossil also confirms, has to do with their ages. Assigning an age of millions of years to these artifacts introduces a thus-far unsolved problem—how to explain the preservation of pristine tissues and whole body structures after millions of supposed years lying within Earth's layers.7
Fox News Latino quoted Francisco Riquelme of the National Autonomous University of Mexico describing the amber specimen as, "a complete and articulated animal that also preserves remains of soft tissue and skin."1
How can this possibly be true, given that "specimens found in the state date back a minimum of 23 million years ago because that is the age of the amber that is extracted from deposits in the municipalities of Simojovel, Huitihupan, El Bosque, Pueblo Nuevo, Palenque, Totolapa and Malpaso?"1 After all, lizard tissues are made of proteins, and studies have clearly shown that proteins turn to dust in only thousands of years—especially in tropical temperatures.8
Like original insect biochemicals and intact body tissues found in amber deposits around the world, these lizard remains retain their pristine quality. If they're really millions of years old, the body tissues would have certainly turned to dust. Of course, if these ambers originated within the last few thousand years, the age problem dissolves.
And both trends—animal kinds that stay the same without showing evolution between basic forms, and soft tissues that stay the same without showing even a million years' worth of decay—match the Bible's concept of recent and complete creation.

References
Image credit: Copyright © 2013 Fox News Latino. Adapted for use in accordance with federal copyright (fair use doctrine) law. Usage by ICR does not imply endorsement of copyright holders.
* Mr. Thomas is Science Writer at the Institute for Creation Research.
Article posted on July 25, 2013.
Posted by Profile at 8:41 PM No comments:

Amber: A Window to the Recent Past

Download Amber: A Window to the Recent Past PDF

Beautiful, golden fossilized amber begins as resin. Exuded as a sticky liquid from bark or wood, it polymerizes into solid amber. It slowly degrades when left in the open and therefore must be rather quickly buried in dense sediments. There are about twenty amber deposits, the most prominent locations are in the Baltic and Dominican Republic.

Many thousands of amber pieces contain fossils. A variety of animals are preserved in those golden tombs, including insects, crustaceans, tadpoles, lizards, annelids, snails, and spiders. In 1997, a piece of Dominican amber was appraised at $50,000 because it contained a frog. Even hair of mammals has been found. Such preservation gives us an idea of the pre-Flood ecosystem thousands of years ago.

The beautiful and aromatic blue amber of the Dominican Republic is the most rewarding of the ambers for aesthetic and scientific reasons, and holds the record when it comes to fossil content. Not only does this amber contain ten times more insects than Baltic amber, it also is 90% more transparent. Some of the fossilized creatures are extinct, but this is hardly evidence for vertical evolution.

There have even been discoveries of preserved animal and plant DNA, "Amber has preserved ancient life to such infinitesimal detail that it even captures fragments of DNA of the organisms entrapped in it."1 The discovery of DNA segments is not surprising for the creationist. However, it stupefies the Darwinist, because evolutionists maintain that amber is many millions of years old.

The oldest known amber containing insects is — according to evolutionary dating — 146 million years old. But what is found are animal forms that remain unchanged. Secular biologists are constantly amazed that creatures displayed in such a clear sarcophagus can be identified down to genus or even species. For example, small oak tree flowers have been found dated at "90 million years old," but they are still oak. The same is true for the oldest feather (100% feather — not a transition from a scale), the oldest mushroom, mosquito, biting black fly, and fig wasp. All that is seen in these organisms is no change ("stasis") or the possibility of extinction. This in no way supports the case for macroevolution, but is certainly what creationists expect.

To conclude, just as the mineralized fossils found in sedimentary rock units worldwide fail to support macroevolution, the same holds true for animals and plants found in "ancient" amber. Creation scientists aren't particularly surprised by the plants, animals, and DNA found in amber considering the youth of this planet. Furthermore, creationists have been requesting these creatures in amber should be subjected to Carbon 14 dating. A similar request is made to date the "70 million year old" soft dinosaur tissue recently discovered in eastern Montana (see Origins Issues "The Devastating Issue of Dinosaur Tissue").2 But secular scientists are reticent. Why? The search for truth should actively go where the physical evidence leads.

* Frank Sherwin is a zoologist and seminar speaker for ICR.

Posted by Profile at 4:28 PM No comments:

Back to What's the Evidence 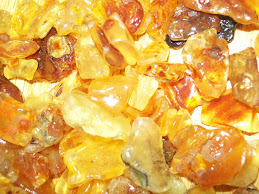 a sample of what booth visitors receive

HOW DID MARINE ORGAINSMS END UP IN TREE SAP?